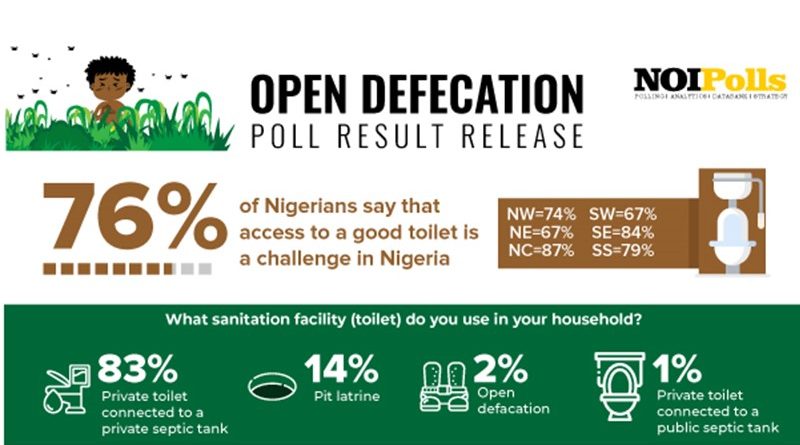 NOIPolls joins the world to commemorate the World Toilet Day (WTD) which was observed on the 19th of November, 2019. The aim of the annual event is to raise awareness of the crucial role that sanitation plays in reducing disease and creating healthier communities across the world. According to the World Health Organization (WHO) and United Nations Children’s Fund (UNICEF), about 4.2 billion people live without safely managed sanitation, three billion lack basic handwashing facilities and 673 million still practice open defecation.[1] This sanitation crisis means that untreated human waste is spreading diseases into water supplies and the food chain for billions of people hence, estimated to cause 432,000 diarrhea deaths yearly.[2] Nigeria is not an exception as data report from UNICEF indicates that Nigeria has been ranked second among countries practicing open defecation globally.[3]

Against this background, NOIPolls in collaboration with Nigeria Centre for Disease Control (NCDC)conducted a public opinion poll on access to sanitation facilities in Nigeria. The Nigeria Centre for Disease Control is the country’s national public health institute, with the mandate to lead the preparedness, detection and response to infectious disease outbreaks and public health emergencies. The aim of NCDC is to protect the health of Nigerians through evidence-based prevention, integrated disease surveillance and response activities, using a one health approach, guided by research and led by a skilled workforce.

The poll highlighted the perceptions of Nigerians regarding access to sanitation facilities, prevalence and practice of open defecation as well as suggestions on how the issue can be addressed. The poll revealed that most Nigerians (76 percent) acknowledged that access to sanitation facility is a challenge. When asked of the sanitation facility respondents use, majority of the respondents (83 percent) mentioned private toilet connected to private septic tank, 14 percent said pit latrine and 2 percent stated open defecation amongst other facilities.

To effectively tackle this awful culture, there should be a concerted effort to provide toilets in public places as recommended by 40 percent of Nigerians so that people would not have recourse to relieving themselves in the open. Government agencies, town planners and other stakeholders responsible for the environment should ensure that toilets are mandated for every household when putting up a structure as suggested by 28 percent of Nigerians. These are the key findings from the Access to Sanitation Facility Poll conducted by NOIPolls in collaboration with Nigeria Centre for Disease Control (NCDC) in the week commencing November 4th, 2019.

The World Toilet Day is an annual campaign that seeks to draw the attention of the world to the challenges of sanitation experienced by people globally. It is also a day which seeks to inspire the world to tackle the global sanitation crisis and to also help achieve the Sustainable Development Goal (SDG) 6 which promises sanitation for all by the year 2030. The theme for this year is Leaving no one behind which is a deliberate step in the right direction to ensure that no one is left behind in the sanitation issues that affects a large proportion of the world’s population. More so, according to statistics, there is an estimated 4.2 billion people living without safely managed sanitation and about 673 million people around the world practise open defecation.[4]

In Nigeria, more than 70,000 children under five years die from diarrhoea disease as a result of unsafe drinking water and poor sanitation condition every year. Also, about 47 million Nigerians practise open defecation according to previous statistics obtained. With regards to these alarming figures, the federal government declared a state of emergency in water, sanitation and hygiene in November, 2018 in a bid to reverse the trend. This was swiftly followed by the launching of a national campaign – clean Nigeria: use the toilet, which was launched in April 2019.[5] In view of this escalating and mind-boggling statistics, and in commemoration of the day, NOIPolls in collaboration with Nigeria Centre for Disease Control (NCDC)conducted a poll to gauge the opinion of Nigerians regarding access to sanitation facilities and open defection in the country.

Trend analysis shows a 4% increase in the proportion of Nigerians who use private toilets connected to private septic tank when current result is compared to the result obtained in 2013.

With respect to knowledge, 63 percent of Nigerians confirmed that they have seen people carrying out this act within their locality and there are more Nigerians residing in the North Central zone who made this assertion.

Of the above proportion, slightly more than half of the respondents (52 percent) disclosed that they always noticed this practice and this is followed by 32 percent who said sometimes. This infers that open defecation is a challenge across the country especially in the North central zone as 68 percent said they always see people practice open defecation. This result further corroborates the findings from UNICEF which revealed that Kogi state, a state in North Central zone, practise open defecation more than any other state in the country.[7]

Of the 82 percent of Nigerians who indicated that they are aware of the dangers associated with open defecation, 40 percent cited diarrhorea as one of the dangers while 22 percent mentioned typhoid amongst other diseases mentioned.

Respondents were asked to suggest what government should do to address the issue of open defecation in Nigeria. 40 percent suggested that more toilets should be provided in public spaces while 28 percent stated that toilets should be mandatory for every household, 13 percent advocated for the enactment of policies against open defecation amongst other recommendations.

In conclusion, the poll result has revealed that access to good sanitation facility is a challenge in Nigeria as indicated by 76 percent of Nigerians. Also, majority of Nigerians (83 percent) attest to the fact that they use private toilet connected to private septic tank while 14 percent say they use pit latrine. It is interesting to note that 2 percent of the respondents disclosed that they practice open defecation.

To effectively tackle this awful culture, there should be a concerted effort to provide toilets in public places as recommended by 40 percent of the Nigerians so that people would not have recourse to relieving themselves in the open. Government agencies, town planners and other stakeholders responsible for the environment should ensure that toilets are mandated for every household when putting up a structure as suggested by 28 percent of Nigerians.

Finally, there is also the need for the government and relevant stakeholders to create more awareness regarding the dangers of open defecation and to build more public toilets in open places to encourage usage of toilets. This can also be achieved by providing mobile toilets in order to discourage open defecation in the country. These actions will go a long way in ensuring that open defecation is eradicated completely by 2030.

The opinion poll was conducted in the week commencing November 11th , 2019. It involved telephone interviews of a proportionate nationwide sample of 1,000 randomly selected phone-owning Nigerians aged 18 years and above, representing the six geo-political regions and 36 states and the FCT of the country. Interviews were conducted in 5 languages – Igbo, Hausa, Yoruba, Pidgin English and English. Although we can say with 95% confidence that the results obtained were statistically precise – within a margin of error of plus or minus 4.65%; we recognize that the exclusive use of telephone polling has its limitation of excluding non-phone-owning Nigerians. Nonetheless, with the country’s tele density put over 100 percent by the Nigerian Communications Commission (NCC), we consider our telephone polling approach appropriate. Also, given the rigorous scientific process of randomization and stratification applied, we can confidently stand by the validity of our methodology and approach. NOIPolls Limited, No1 for country specific polling services in West Africa. We conduct periodic opinion polls and studies on various socio-economic and political issues in Nigeria. More information is available at www.noi-polls.com.

This press release has been produced by NOIPolls Limited to provide information on all issues which form the subject matter of the document. Kindly note that while we are willing to share results from our polls with the general public, we only request that NOIPolls be acknowledged as author whenever and wherever our poll results are used, cited or published. NOIPolls hereby certifies that all the views expressed in this document accurately reflect the views of respondents surveyed for the poll, and background information is based on information from various sources that it believes are reliable; however, no representation is made that it is accurate or complete. Whilst reasonable care has been taken in preparing this document, no responsibility or liability is accepted for errors or fact or for any views expressed herein by NOIPolls for actions taken as a result of information provided in this report. Any ratings, forecasts, estimates, opinions or views herein constitute a judgment as at the date of this document. If the date of this document is not current, the views and content may not reflect NOIPolls’ current findings and/or thinking. 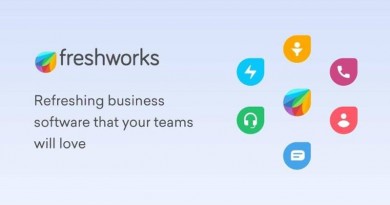 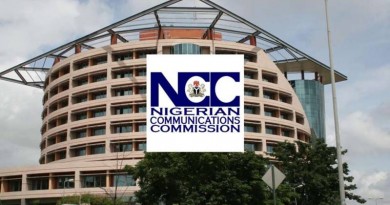 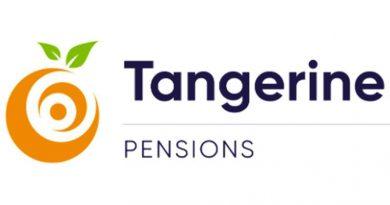